So, continuing the story of the best kept secret in the history of the Minchin household.

You may recall in the first instalment that I had reluctantly decided to treat my beloved to her dream destination.  And having secured the flights and hotel, it was time to book the all important Donny & Marie concert that was the whole point of the trip.

In hindsight, maybe I should have done that first.   Because if I had, I would have discovered that they actually closed in March.   I had missed the boat.  Disaster.  So now I was faced with taking the boss to her dream location, only to break the news that it was a case of “close, but no cigar”, and I had fell short on delivering the dream.

Now, although my family are fairly good at keeping a secret, they are also prone occasionally to let the cat out of the bag accidentally.  Like, “oh, we can’t go shopping that week because you’ll be in….. ooops”.    So I made the fairly difficult decision of not telling anyone about the trip.

And if I couldn’t trust my family not to accidentally let it slip, then certainly I wasn’t going to trust friends, work colleagues, the dustman, etc.   So I told no-one.  Just call me paranoid.

I also managed the whole of our Ireland visit with our good friends from the Czech Republic without spilling the beans.  Sorry Joe / Renata, I know you would have been so excited to share in our news.

Now, if you watch my first of our two part Vegas video diaries at our newly named “Rob and Sue’s Video Diaries” channel (clever eh?) , you’ll see me tell you how I changed the hotel reservation a couple of times during the lead up to the trip.

That’s the beauty of sites like booking.com with a ‘no cancellation fee’ policy – I kept finding either better special deals, or they had just dropped the prices of the same room, so I simply booked a second room and cancelled the first at the same time.  I reckon I saved a hundred pounds or more in the process.

You’ll also see me hiding in the loft to video each month’s update, ready for the post-trip video I was planning that would explain just how devious I was!

Now, one such update is pertinent because I went back on the ticketmaster website a couple of months later to see that the Donny & Marie show had been extended through to June, with the last date just a couple of weeks before we were due to arrive.  Talk about a kicking a man when he’s down.  I was furious (even though it was my fault of course)  and if I had found their email address I would have given them a right roasting!

The other thing I recommend you do monthly (in fact I did it weekly) is keep checking your seat allocations on the airline website – when flying to Mexico they changed our seats without telling us, and I wasn’t having that happen again;   they did change the outbound to the row behind the one we had booked, but the front row was still clear so I just changed them back again – they didn’t alter again but its worth keeping your eye on it if you have particular seats that you want.

Time marched on, and it got to the time when Sue has to put in her holidays at work.  I had put a reminder in our calendar for the break, simply saying “book these dates off”.

Now, Sue of course spotted that – she should have been a detective – and immediately asked where we were going.  I just said, “It’s a surprise for your birthday”.

Work thought I was just having a few days off, and even on the day that I broke up, I was telling people who were asking what our plans were “… no-where special…”
I hope you’ve forgiven me!

Insurance was booked, dollars exchanged and secreted away, ESTA’s applied for and granted, all without anyone’s knowledge.

So far, so good.  In fact, I was pleasantly surprised I had managed to keep it a secret this far, but there was still a way to go.

Of course as the time grew near, the kids pressed more, and still I refused to budge.  I think mum was visibly annoyed I wouldn’t let on.  Over Christmas and at a couple of other events, Vegas had suddenly started coming up in general conversation and I just kept scoffing and saying “In your dreams”.  Well, I was sort of right wasn’t I?  While all the time wondering if I had slipped up somewhere and someone had cottoned on to my well hidden plans.

Then, the next bombshell dropped was one of Sue’s dearest friends announced they were getting married in Vegas in December.  Although I said to them at the time “very nice, but not a place I would go”, I was quite sad, because I know if I had not already booked, we would have definitely been their for their happy day.

Fast forward to June 2019, and we leave at the end of the month and my thoughts are turning to the final arrangements.  I need a suitcase out of the loft.  This is going to be a give away.  One or two cases? One is going to have to be enough.

Sue knows our travel habits and routines well, and how I play the next bit will give her the clues she needs to figure out our destination.

But it works out OK – obviously frustrated that for the first time in her life she’s completely in the blind, she starts to ask what she’s going to need to wear.  No worries, I got a case down from the loft, and we go through every item in her wardrobe and I say yes or no to whether it would be appropriate.   Nothing overly dressy, but a couple of red herrings sufficient to have her puzzled.  All relatively casual.  No bathing costumes (so not a beach holiday?)  Nothing for extremely cold weather – but then even I know better than to book her in for a secret snowy ski break.

Then the next inevitable question.  “Are we flying?”   I had made a show of not weighing the case, which ought to help to the confusion, and I purposely left the passports in their normal safe place until the last minute, but eventually I had to start gathering up the documentation and ol’ eagle eyes spotted they had gone missing.  “We might be” I replied.   “Or maybe I’ve just moved the passports to throw you?”.

I slipped the case on the scales when no-one was looking.

And the week before the flight, I start to panic.  I really should try to find somewhere to take her during our stay, to make up for the D&M fiasco.   So I head back to the Vegas entertainment websites once more to check the Vegas shows.

There was a couple of the Cirque Soleil shows within reach – in fact one in our hotel – but full of scantily clad women and not really Sue’s thing.

Now I have to say, these sites aren’t always that accurate.  For instance, we found on arrival that Paul McCartney was playing in the T-Mobile Arena next to our hotel for two nights after we arrived, but I didn’t see that at all.

We would arrive during a break in the Barry Manilow residency, else that would have been a second choice.  I saw Reba McEntire and Brooks and Dunn in concert (we like a bit of country music) but at over $250 each for back of the arena seats, that was a none starter. 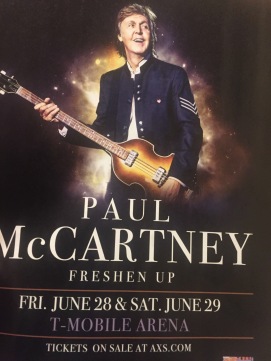 But wait – what was that advertised at the Flamingo?

Donny and Marie had extended their dates again through July.    And there was ONE night when there were two seats together in the show lounge still available.  Not cheap, not the best seats, but by that time it didn’t matter anymore.   With a racing heart and overly high blood pressure I booked them and waited for the confirmation e-mail.

Seconds later, I had two tickets to print out to see Donny and Marie.

One thought on “I could tell you, but then I’d have to…”