Tonight, I’m writing something slightly off topic, but I feel it warranted as I feel a little frustrated at some posts I’ve read on other social media.  Not aimed at me personally,  but collectively (in my opinion) taking a swipe generally at people writing travel blogs for, basically it seems, being ‘affluent’ enough to be able to undertake their travels with a seemingly limitless budget.

So I feel compelled, for my part at least, to set the record straight.

First, I admit there are people out there who seem to have struck gold and have made a career out of travel blogging.  They probably secure lucrative deals with travel providers in exchange for their reviews.  Good luck to them.  Because wouldn’t  we all be there if we could?   Do we complain about the other bloggers that are treated to free or cut price products like make up, or are treated to free meals in return for their reviews (which we assume are going to be totally unbiased and nothing but factual)?  No.  Maybe these sort of perks are not seen to be as so exotic as a free holiday.   But then again, are we SURE they are getting their travels for free?  Maybe they are paying for them.  I know I certainly am.

Next.    I’m not rich.  Don’t assume because we travel, we must be therefore “rolling in it”.
I’m sure there are bloggers out there who ARE rich, whose rich daddies send them all over the world instead of getting a job.  But don’t tar everyone with the same brush.

We haven’t always travelled.   When I was younger, I wasn’t suddenly presented with a vault full of gold to pave the way for living the highlife.  Indeed, when we first got married, the whole of my wages went on the mortgage, and the whole of Sue’s wages paid for the necessities – electric, food etc.  Considering having our first child was literally a mammoth financial commitment that we had to budget for very carefully.

After our first born arrived, we had no money for what most people consider “essentials”.  We didn’t drink, smoke, and we only had a car because my dad gave me his for free.  And even then we had to let it go eventually and for a couple of years I found myself walking the six miles to and from work twice a day in order to save the bus fare,which we couldn’t really afford.  Yes, a bus ride was a luxury.  Rain, blizzard, didn’t matter.   Those few pence were making all the difference to us.

Our idea of a holiday back then was a weekend in Blackpool largely funded by mum and dad, or sharing a caravan in Skegness with Sue’s generous Aunty and Uncle who put us up for next to nothing.

Slowly but surely I worked my way up the ladder at work, and one year after all of this excessive cost saving (believe me, you don’t know the meaning of the word austerity) we decided enough was enough and we had to have a holiday for our own sanity.  And having done the sums, we found we could get a package holiday in Majorca CHEAPER than a caravan in Skegness.  So we saved every last penny. 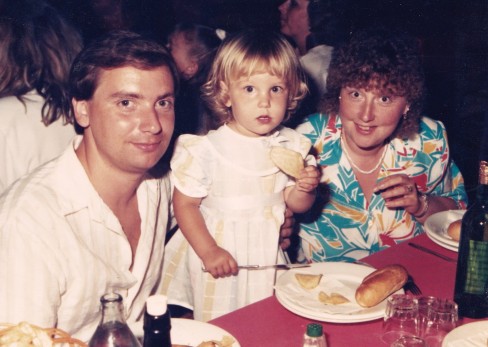 And that’s where we went, and that’s when we caught the bug for going abroad for the next couple of years – not just for the guaranteed weather, but to broaden our experience of the world.   And of course grandad and grandma would come too, for the fun of it… 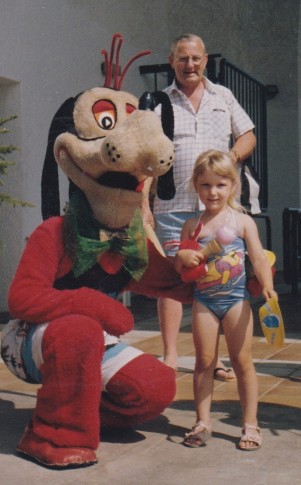 Holidays with the grandkids – every grandad’s dream

We tried the caravanning option, touring around with a little battered but hugely loved two berth tourer, until again we did the sums and found package holidays worked out cheaper than replacing and running the caravan for our growing family.

Over the years we have scrimped and saved up for holidays, taken £9 Sun holidays, wangled cheap weekends when Easyjet first came out (£24 return for a trip to Amsterdam), managed to take our kids to Disney (on the mortgage, paid back over a number of years), and even took our first cruise (five year bank loan).

One thing has always been paramount – never get in debt, always cover the essentials first.  Wherever we could, we saved money on our holidays.  Driving 10 hours through France to save hundreds on the ferry price for instance.  Choosing destinations not through their desirability, but whether one was a few quid cheaper than the other. 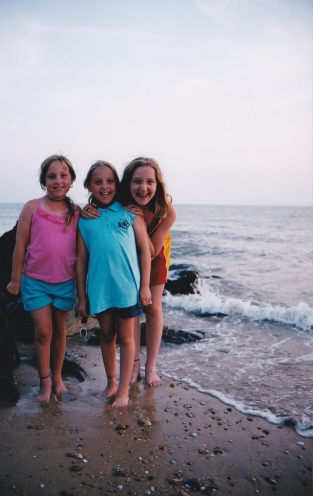 Enjoying the beaches of Brittany on a budget

Plus some of my own travel experiences have been courtesy of my employment, where I have found myself working in the States, Asia and all over Europe.   But work is not a holiday, and my family have at times paid a hefty emotional price for my extended and repeated absence from home.  It is some compensation that the occasional bonuses helped fund the family holidays, so we never complained.

Visiting the most exotic places – with family noticeably absent

We still don’t drink or smoke, and our ‘vice’ is the occasional meal out or takeaway.  Probably more than occasional these days, judging by the expanding waistline.

I’ve continued to work hard and progress up that ladder until we were comfortable.

We literally had YEARS where we went without a vacation due to lack of money.   And then when we could afford a holiday, it tended to be only every other year. As time goes on though, your kids grow up and leave home, monthly outgoings fall, and you suddenly find yourself with a bit of spare cash.

Recently we unexpectedly found ourselves in a much better financial position, although to be honest I would have rather not be in that position if I had a choice (I’m not going to explain).  And now we have no real money worries and after all of those years of scraping by, and struggling to pay for those vacations for us and the girls, we feel it quite appropriate to treat ourselves, and maybe have two if not three extravagent holidays in one year if we feel like it.  We STILL don’t drink or smoke, yet I hear other people blowing all of their money on fags and booze while they sit there complaining of no funds.   Your choice, stop complaining about your financial decisions. 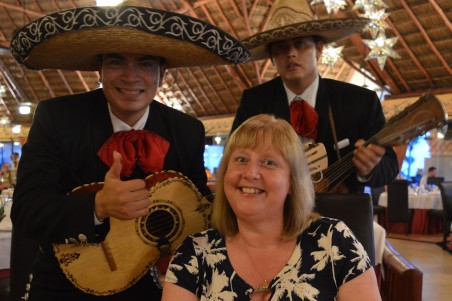 Treating ourselves for our 35th anniversary, Mexico style.

People might not be able to relate to travel bloggers, but maybe they can relate to my own story and realise that we have asked for nothing, owe nothing and certainly don’t have anything to feel guilty about.  Although of course if someone out there wants to treat us to a free stay in return for a honest review, I’m not going to turn you down!

I enjoy writing, love photography, live for travelling and we choose to share our adventures both here in the UK and overseas.  Why share?  I don’t know.  But it’s certainly not to brag to all of you out there who can’t afford to do the same – yet.   Yes, circumstances CAN change unexpectedly and just because you can’t live the life now, who knows what will happen in the future.  So have some ambition, don’t just take the easy option and succumb to envy.  Because maybe you are doing the honest hardworking travel bloggers amongst us a disservice.  And maybe, just maybe, you might find yourself in (or on) the same boat in the distant future?