On our way to Poole recently, we decided to take a one night stay at Whittlebury Hall and Spa, situated in the little village of Whittlebury, Near Towcester, and a couple of miles from Silverstone race circuit.

Before this stay we hadn’t heard of this place – I picked it as a mid-journey overnighter on our way to Poole in Dorset as we were setting off late in the afternoon and wouldn’t arrive in Poole until very late otherwise.   I had been looking at somewhere in the Oxford region, which is about halfway for us between home and Poole.   It was a late booking so we expected prices to be higher than normal, and sure enough the main hotels just off the A34 where coming out over £100 for the night, which was a bit more than we wanted to pay.

Slightly further North we found Whittlebury Hall on booking.com for £57 / night B & B, which we couldn’t fault.

In fairness I don’t expect much for those sort of prices so we were pleasantly surprised upon driving up the long drive to the hall on the Friday evening, just how ‘swish’ the venue was.   We also hadn’t realised until we approached the place just how close to Silverstone it was – an ideal stopping point for anyone visiting the track, and I’m sure many who were there would be doing just that come Saturday morning.

Check-in was painless, and we also realised at that point that the hotel also offered a spa; we discovered this by the advert’s playing on the TV’s in reception offering a day’s spa for £49/ person (good value in my opinion) and also the number of guests wandering around in fluffy white gowns – which might of been considered a little out of place otherwise.

We had passed a group of people heading down the drive, I assume to the pub just at the bottom of the drive, but we decided to eat in.  So first thing was to check the room out. 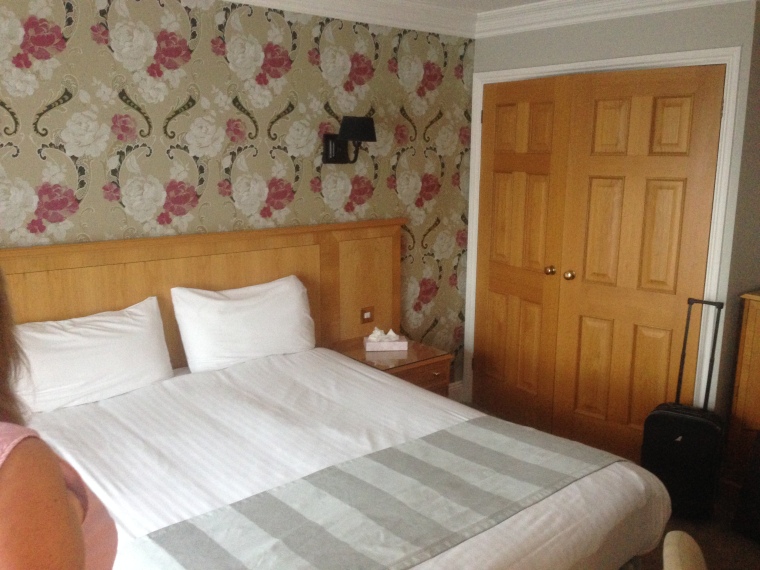 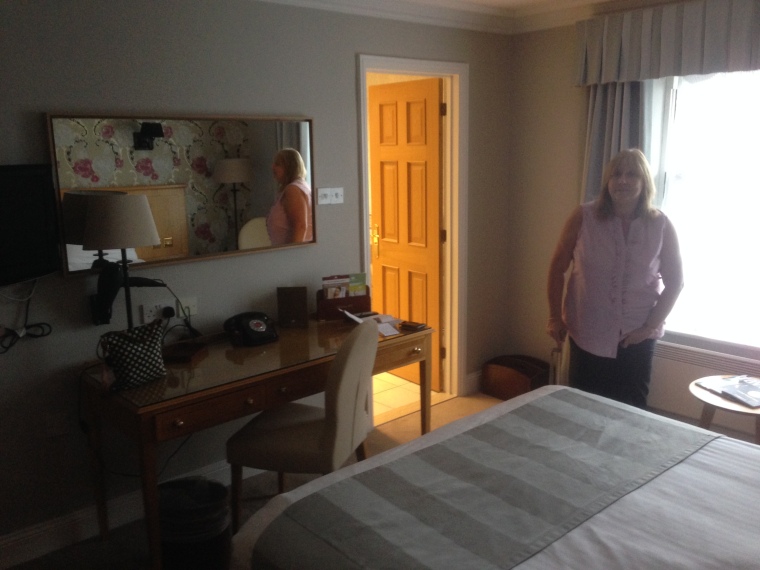 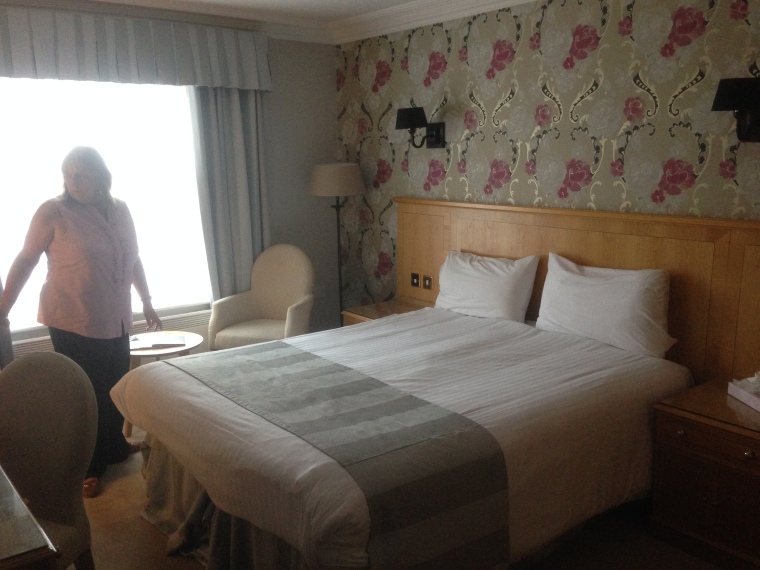 We were pleasantly surprised with the quality of the room, facilities and size.  The only real issue we could see was the horrendous heat.  It was a warm evening, the room was stiffling hot.  We cracked open the window and found our next problem – our room had a large air conditioning unit situated right outside our window, and it was terribly noisy.

In fact all of the rooms seemed to surround an inner compound which I assume is either the conference rooms, spa or maybe both – but the whole roof area was a maze of air-con ducting and fan units, and I wouldn’t have thought any of the other rooms around that area where any better.  If we had been there for more than the night, if it hadn’t been so late at night, or had I paid a premium, I would have certainly been down at reception asking to be moved. 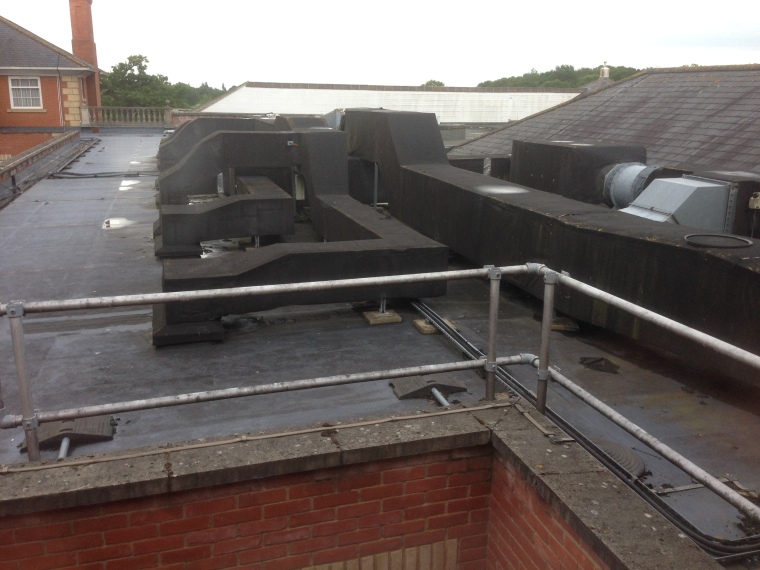 It wasn’t so bad when the window was closed but then we couldn’t breath – ironically the air conditioning unit was not servicing our room.   Fortunately we found an electric fan in the wardrobe – unfortunately it was noisier that the air conditioner outside!

The bathroom was well appointed, and apart from the noise we would have been really happy with our find. 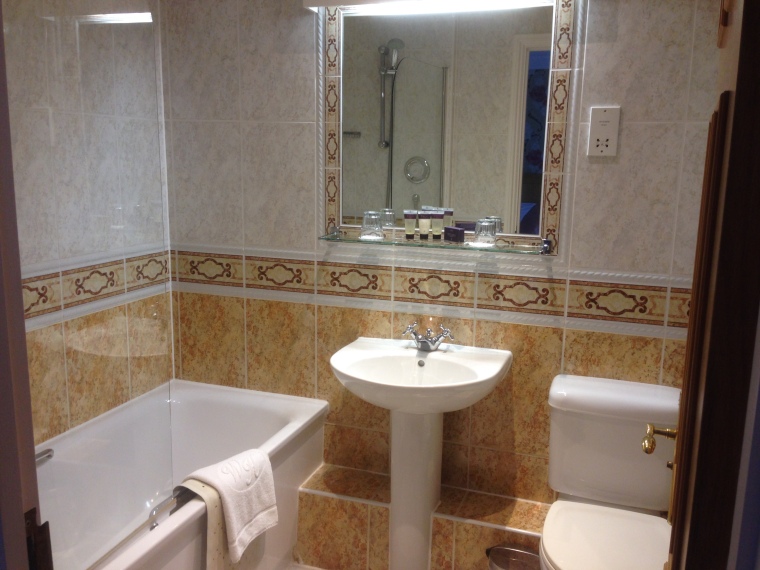 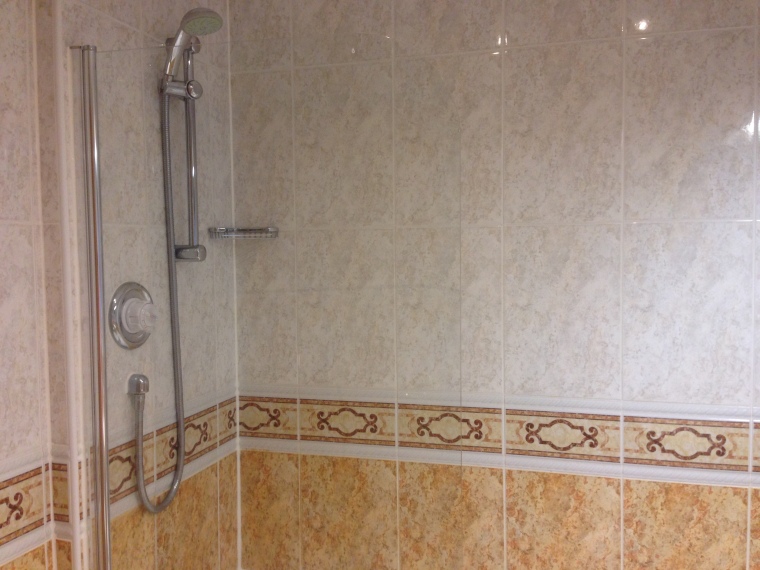 The old fashioned phone was a nice touch. 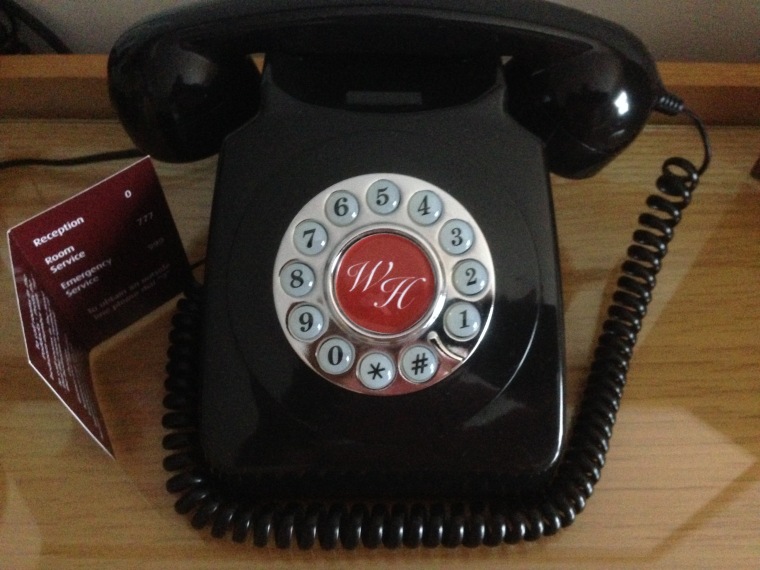 Outside the corridors were all tastefully decorated and in good condition – a mark of a struggling hotel is the one that neglects the common areas such as corridors and receptions.

The only problem I had was that I kept expecting to see two little girls standing at the other end – spooky! 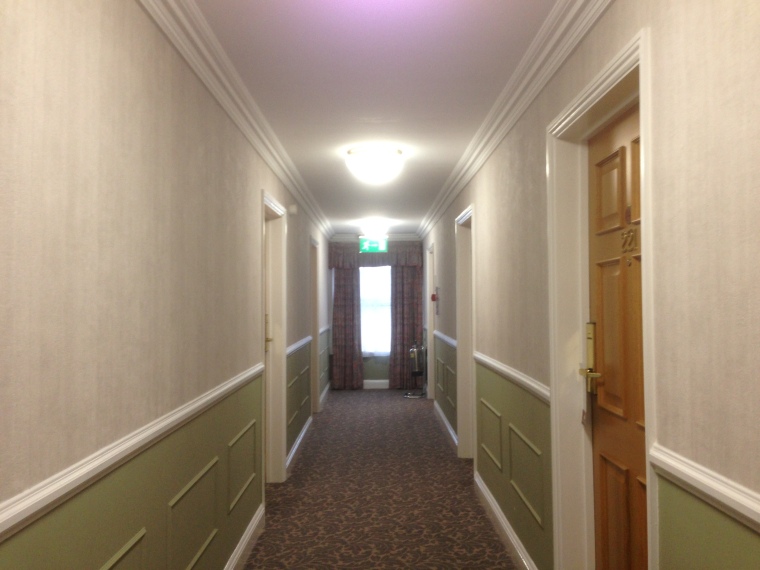 Returning downstairs, we checked out the a la carte dinner menu in the Aston room, and decided that it was a little too much for us at the time of night we had arrived, and a bit pricey too, so decided to opt for a bar meal.

The bar is huge, in fact all the hall common areas seem very spacious, and the bar is covered with Silverstone memorabelia, and is another hint at its famous neighbour.  In fact during the evening people were wandering in still in their racing gear, or carrying bits of racing cars – each to their own I suppose.

The bar prices were a bit pricey, as was the bar menu – £15 for fish and chips.  We were told about the special offer upon ordering, £18 for fish and chips and a drink, which would have been better value than buying your drink first as we had done- so bear that in mind, check the offers before you order. 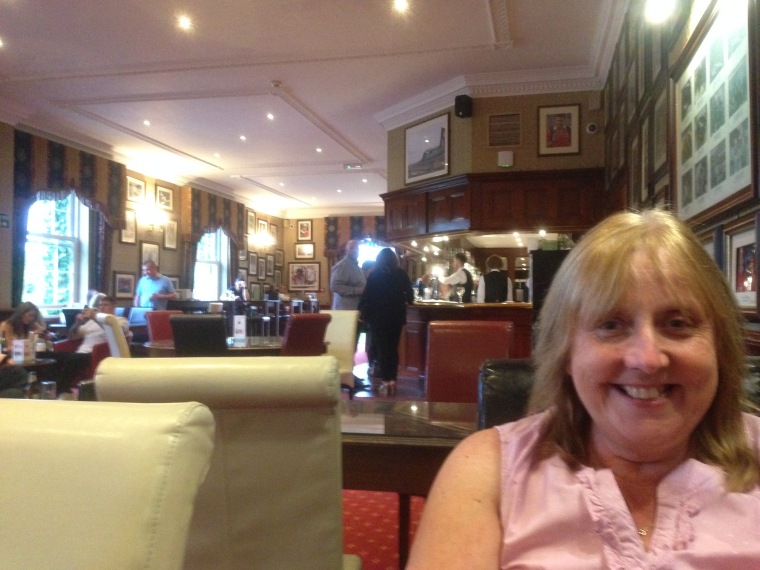 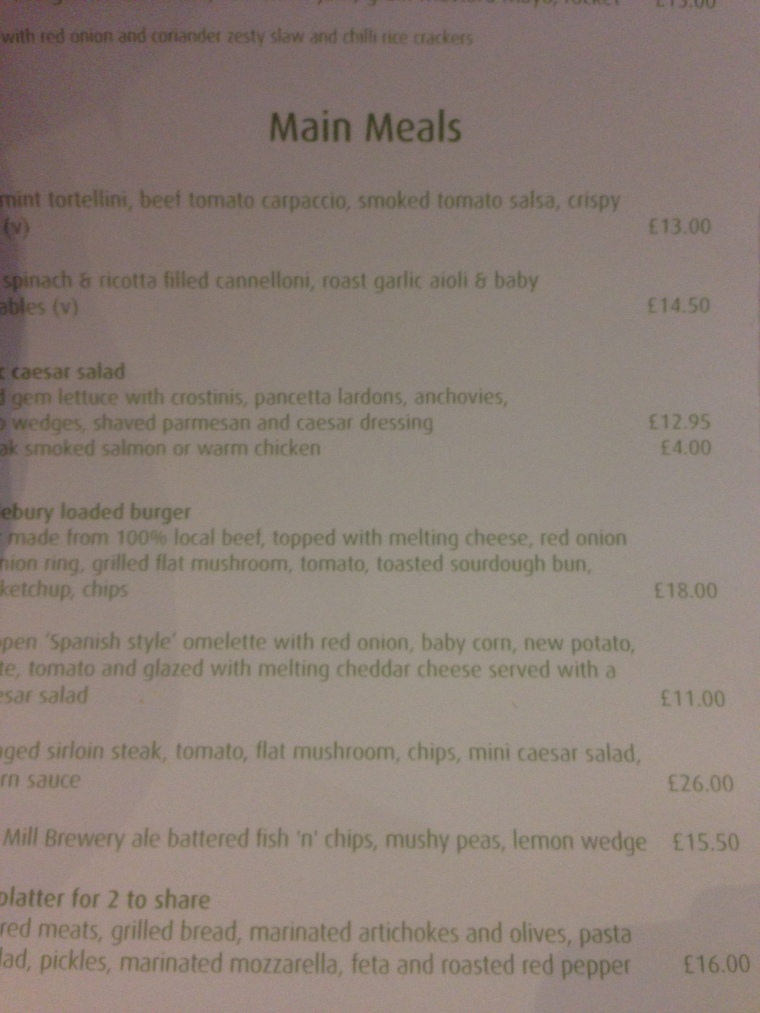 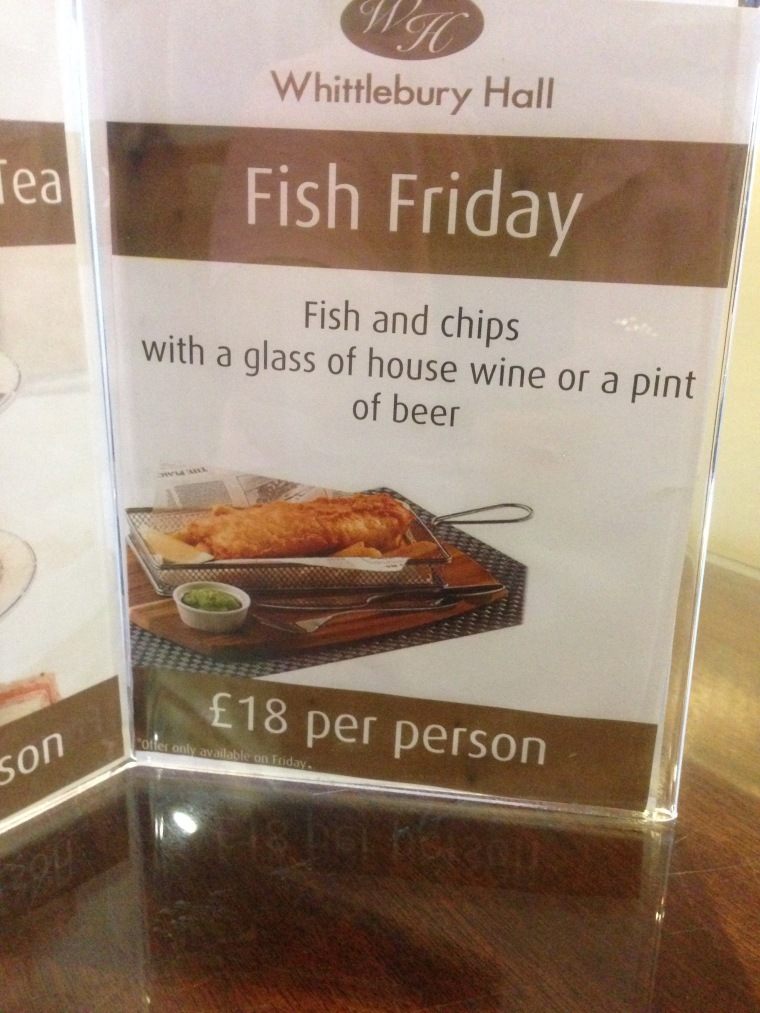 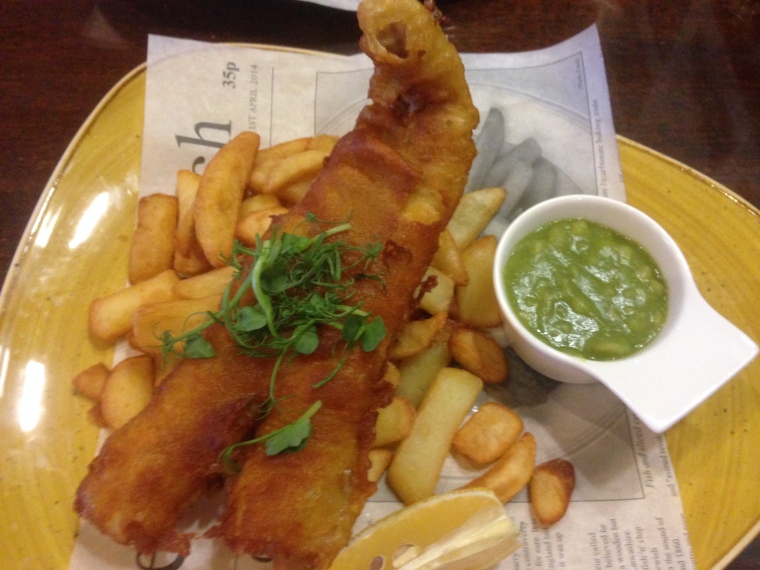 The portions weren’t huge, but then we had already said we didn’t want huge, so it worked for us – however the chips were gorgeous and the fish succulent – no complaints.

At £8.50 each we decided to skip dessert and went back to the room for tea/coffee. 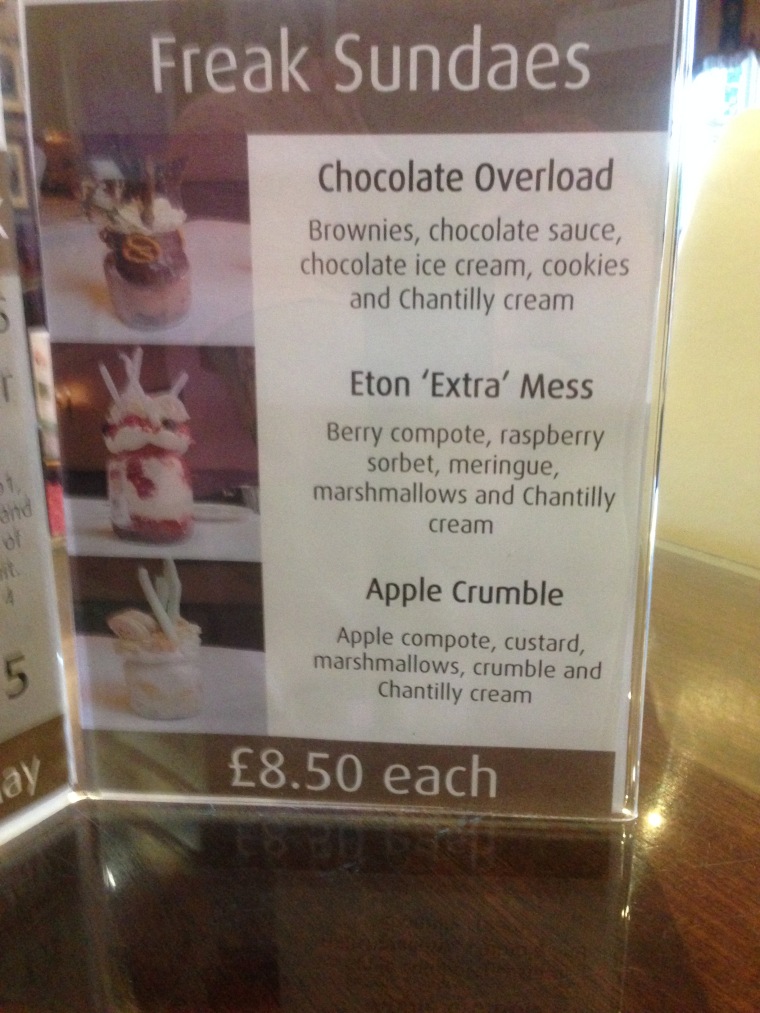 Back at the room and the air conditioner was noticeably quieter – not off, but certainly not so obtrusive, and with that the electric fan went back in the wardrobe and the comfortable mattress soon had us both snoring soundly.

6 AM next morning however and the aircon unit kicked up again, which was a good thing as it had us both out of bed bright and early and down for breakfast.  We still had a long way to drive!  We would have not been so happy if we had been looking forward to a lay in.

I’ve read many complaints about breakfast but we certainly didn’t have any issues.  A well stocked hot and cold buffet was more than enough to meet our needs and the beverage service was satisfactory. 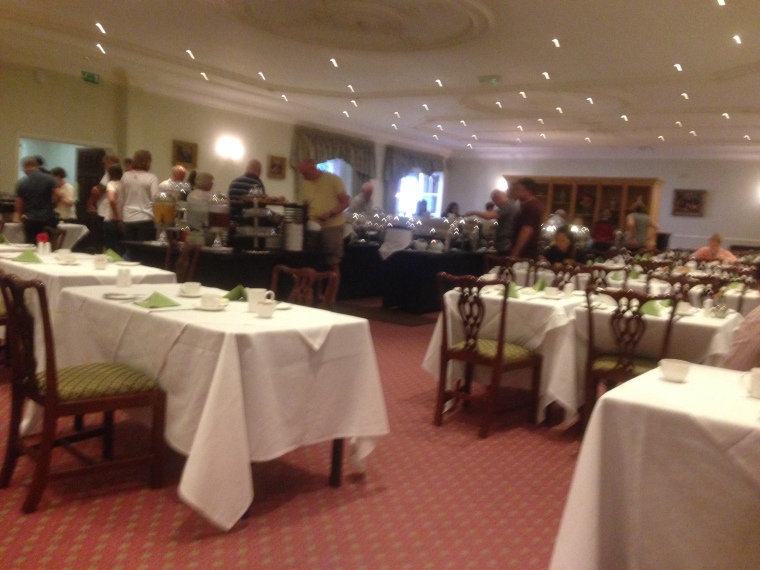 A well placed venue for Silverstone, with a number of options for accommodation.   The spa looks good value but I’m not sure it’s the right sort of place for us – I would feel too self conscious walking around in my dressing gown surrounded by non-spa guests.   Food and beverage is pricey, commensurate I suppose with the perceived grandeur of establishment, but this was very much offset for us by the excellent room rate deal via booking.com.  Had we have paid a higher price for the room, it would have turned into a very expensive night.   The air-con issue is a problem that would definitely prevent me re-visiting the hotel.

Still, I’m sure lot’s of people are happy with the venue, and I’m willing to score it a reasonable three and a half stars, all things considered.