Travelling around the world for my company has been a mixed bag of good and bad moments, but one highlight on every trip has been the really nice people I have met along the way, and the special friendships I have made with many of them.

One person in my mind stands up at the top of my list of overseas friends, and that is my good friend Mr Josef Vodehnal, from the beautiful village of Dolní Lánov in the Czech Republic.

After talking about it for many years, last year I finally managed to make a visit to his home town and experience for myself the stunning scenery he had described every time we met.    This is my account of that visit…

Geography
For those of you whose geography isn’t up to scratch, landlocked Czech Republic lies in the centre of the continent of Europe, and is bordered by Germany to the west, Poland to the north east, Slovakia to the south east and Austria to the south. 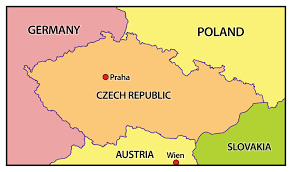 Dolní Lánov (pink dot on the map below) lies north and centre of the country near to the town of Vrchlabi (yellow dot) in the Hradec Kralove region, at the base of the Krkonossky national park close to the famous Krkonoše mountains that form the border between the republic and neighbouring Poland.  Around 750,000 people visit the Hradec Kralove region each year, with many more heading up to the mountain regions.

My friend Joe lives in the small village of Dolní (Lower or Bottom) Lánov, which is about 3 hours drive from Prague and about 5 minutes out of Vrchlabi.

Dolní Lánov, which sits adjacent to the river Labe,  is surrounded by beautiful green mountainous countryside and a few kilometres out and you are up in the hills with ample tracks and paths to follow, rare flora and fauna to see, taking you over waterfalls and streams, through dense spruce and pine forests, surrounded by spectacular scenery and well serviced by hotels and pensions and little cafes, taverns and restaurants all offering delightful food and drink at very reasonable prices.

This region is truly alpine in nature, a fact that isn’t lost on the visitors from neighbouring countries and those even further afield.   The air is clean, the skies are cerulean blue during the day and the starscape is literally breathtaking at night, with no light pollution to spoil the view.    Indeed it is the first time i had seen the milky way so easily visible since I was a young boy lying outside on my back garden in the middle of winter.

The tell tale signs of ski-slopes on the hills of the Krkonossky National Park, while below
one of the many woodland walks crossing crystal clear streams heading for the river Labe.

During my stay we visited the church in nearby Strážné, which was a special moment for me as I had chosen this place as a subject of one of my early paintings (painted from googled images), so to see it for real was a real treat.  Needless to say I took a few new pictures of the church to add to my collection.

The church at Strážné above,and my original painting below

Below, a christmas card view of  Strážné church in the winter.

While In Strážné we visited the    where Joe recommended the  the local beer and the Borůvkové knedlíky (blueberry dumplings). The beer was good, more like a pale ale, and the dumplings were very tasty and very filling.   If you are passing I can highly recommend the Restaurace Strážné (Address čp. 129 543 52 Strážné).

Vrchlabi
The closest town to Lanov, Vrchlabi (pronounced verklabi) is known as the gateway to the Krkonoše mountains. Originally an important mining town, extracting and processing precious ores, afterwards building an important glassmaking and textile industry following the industrial revolution,  the town is now a valuable tourist destination especially for the winter skiing, with numerous downhill runs on the slopes of the Krkonoše. 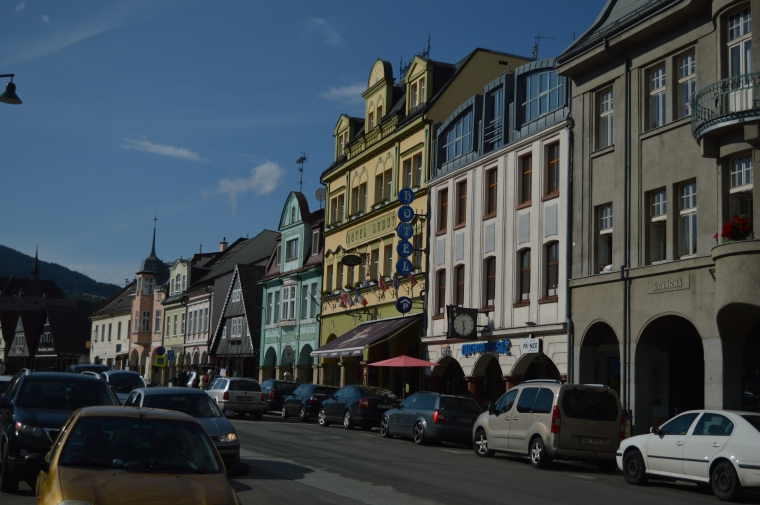 Vrchlabi is also famous for its production of automobiles, and still has a Skoda manufacturing facility which supports the Czech automobile industry.

It has many famous tourist attractions including a beautiful palace near the town square, an Augustinian monastery and a spectacular Neo-Gothic church built in 1889 complete with a 60m tall spire.  Well worth spending a day or two visiting the town and surrounding scenery. 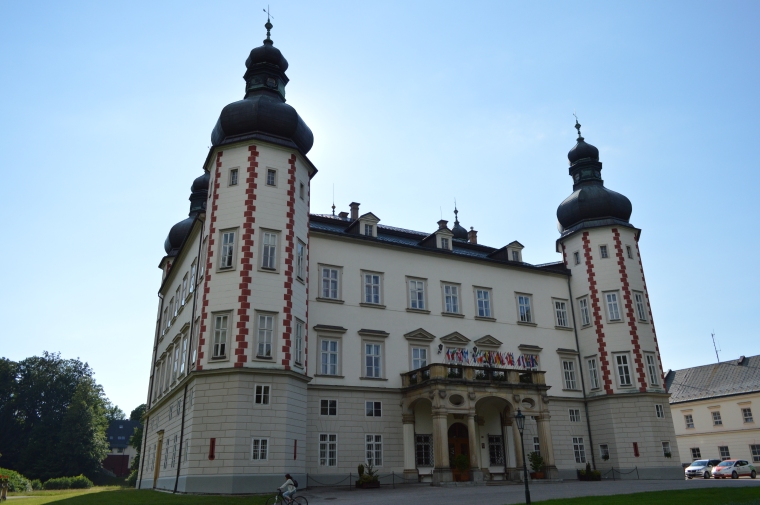 Above, the palace at Vrchlabi, complete with lake and ornamental gardens, is now the town hall, while below is the town’s Neo-Gothic church.

Skiing
In summer, one thing noticeable while up in the hills is the large, long and wide grassy cuttings tucked into the forests along the mountain ridge.  The presence of stationary chair lifts give away the fact that you are looking at a major ski centre, with numerous slopes attracting skiers from all over Europe.  However, once the snow arrives these vast expanses through the trees transform to one the most popular ski resorts in the country. 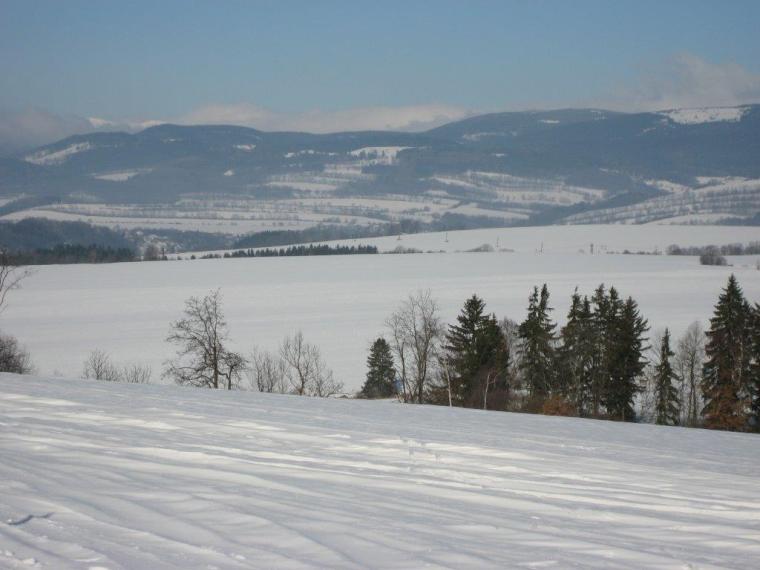 .In addition Vrchlabi boasts over 35km of pristine cross country ski tracks, many with artificial lighting.

This year (January 2017) alone the region has already seen over half a metre of snow and i’m guessing the skiing is very good.

My friend Joe shows me a map of the ski slopes surrounding his village – Below, out on one of the many the cross country tracks above his home, together with his wife and friends. 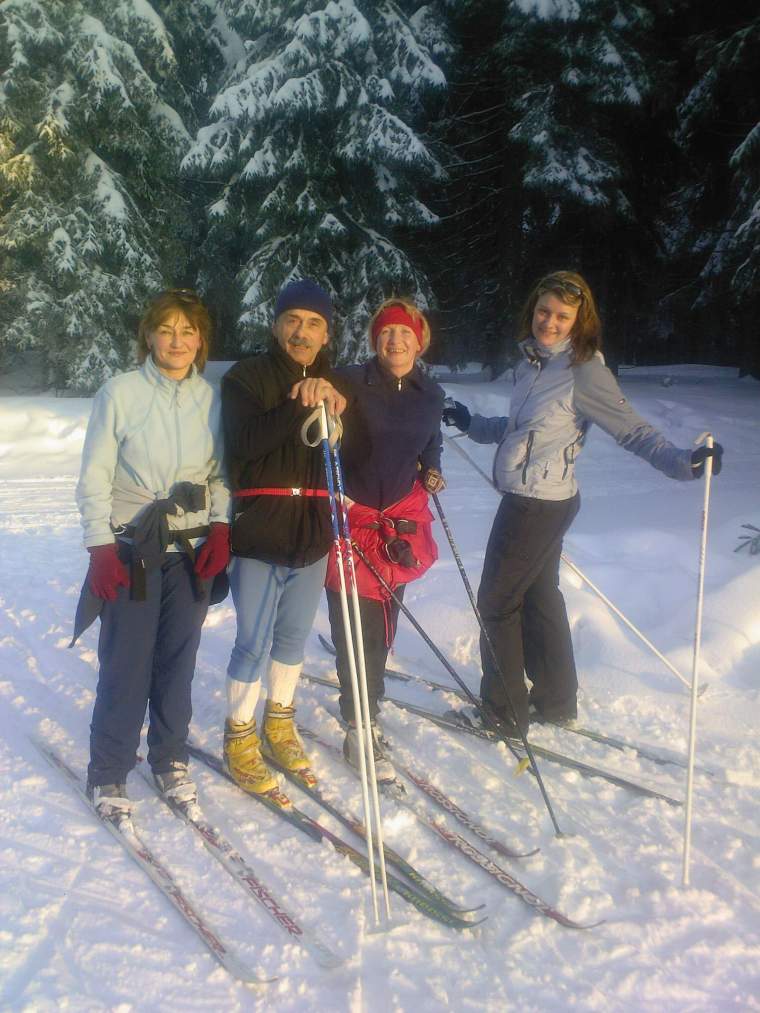 While tourism plays a vital part in the economic climate of the Krkonoše region, over 10,000,000 people per year visit the giant mountains on both side of the CZR/PL border causing significant environmental impact in terms of trampled paths and earth erosion, damaged flora, tons of waste, noise and emissions from transport, and encouraging further  construction of accommodation and amenities.  Fortunately a committee based in Vrchlabi (made up from representatives of all the various regions of the mountain) aim to minimise these impacts and maintain and improve this precious environment.

Poland
One of the highlights of my visit was a trip to Jelenia Gora in Poland – taking route 14 out of Lanov, through the town of Vrchlabi and up into the Giant mountains until the road joins the E65 highway and heads up through the non-existent border crossing and over into Poland.   Just over the border lies many popular holiday resorts all of which are very picturesque and popular destinations for Polish, Czech and German alike.

Once down off the mountain into Poland, it is possible to appreciate the Krkonoše from the other side, and quite visible is the Polish Meteo weather observatory on the peak of the Sněžka mountain, standing prominent above the surrounding ridge.

Getting there
It is possible to drive from the UK via the Netherlands and Germany,  entering the Czech Republic high up on the German / Czech border south east of Dresden which is then a short drive onwards to Vrchlabi and ultimately Lanov / Dolní Lánov.

The Czech Republic has three main international airports, Prague, Brno (pronounced bruno) and Ostravia, and I recommend using Prague to visit this region of the country.  There are good road and train connections from Prague to the region.

While i was staying with Joe and his wife Renata, in his lovely hand built chalet style home, he took me to an adjacent plot of land which he offered to sell to me.  I’ve got to say that if I had the money to erect a property on it, i would have snapped his hand off.   I can’t think of a more beautiful place to spend time in.

Summary
This destination may not be top of your exotic holiday wishlist, but if you love mountain air, beautiful scenery, hill walking cycling or skiing, you wouldn’t go far wrong spending some time around in the mountains surrounding the idyllic village of Dolní Lánov.