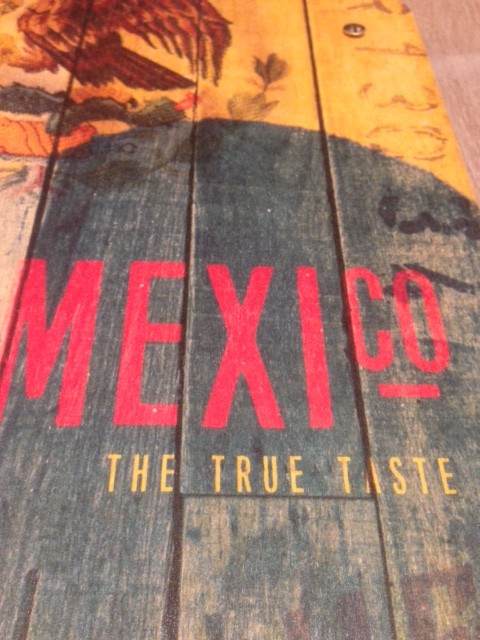 While walking through the Intu Westfield Centre at Derby a couple of weeks ago we came across this “new” Mexican restaurant – I say new, they say they’ve been open since July.

Finding ourselves having a leisurely morning and with lunchtime looming, we decided to call in at check it out.

The restaurant is bright and airy, typically and pleasantly  themed in traditional Mexican style fittings; I thought the genuine Mexican newspapers used to wallpaper the Gent’s wall was an exceptionally ingenious touch – I’m just not sure how cleanable and durable it is!

The menu was sufficiently varied with a number of traditional favourites and some we hadn’t heard of before, and it all seemed surprisingly quite good value to say we were in an Intu, where typically we’ve found prices a bit on the pricey side.  Unfortunately the drinks menu could not be included in this praise, opting for the cheapest drink on the menu, and getting a decidedly small glass for our money (note the size of the glass against the fork and salt shaker) – I would have thought they would have been at least refillable at that price – £2.49; I know this might be the going rate but when I can get 2 litres for just over £1 in the supermarket I’m always going to complain about soft drinks prices, especially in small glasses.  Margaritas and other cocktails start around £6.99 for single glasses.

for starters, we opted for the shared nacho plate which advertised eight individual nachos layered with refried beans, melted Monterey Jack Cheese, crema, fresh Pico de Gallo and avocado crema.  I wasn’t quite sure what we expected but what arrived was surprisingly filling, and although I’m more used to a large dish of dorito’s with cheese and salsa scattered all over, these little bambinos had obviously had a lot more thoughtful preparation put into them, and a lot more taste.

For our main course we both opted for the enchiladas consisting of soft corn tortillas filled with Monterey Jack cheese and a choice of filling, baked in a mild chilli enchilada sauce with crema, lettuce and tomatoes on the side.  Sue opted for the mexican picadillo beef filling at £9.29 while I went for the chicken tinga at £8.99.

I don’t know what was in the sauce but it was scrummy – Sue couldn’t finish it off but I somehow managed to devour mine. 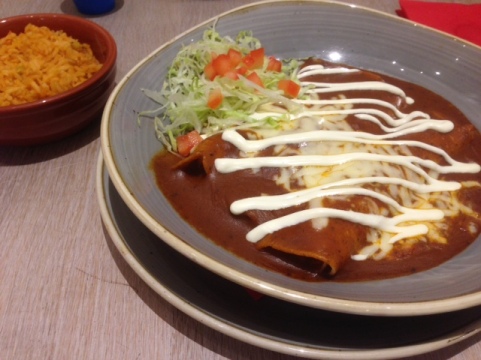 Although we had decided to skip dessert, we were having such a good time, and feeling extravagant we decided to go for it and I treated myself to the Churro Ice Cream Sundae (£5.49), with lashings of cinnamon ice cream, dulce de leche and whipped cream, while Sue surprisingly had the Banana Burrito – Chopped banana and cinnamon sugar wrapped ‘burrito-style’ and served crispy with dulce de leche caramel sauce and vanilla ice cream at £ 5.49.

As a life long fan of Chiquito’s restaurants, I have to say Mexi Co give them a run for their money where quality of food is concerned, and we certainly would be happy to return for some more.  But the prices (or sizes) of draught soft drinks needs looking at.

You can see their menu at http://www.mexicorestaurants.co.uk/

Final score, due to the expensive soft drinks price only :

Rob and Sue visited the restaurant in January 2017 and paid full price.

Would you like a honest review of your restaurant?  Doesn’t matter where you are in the country, we might be passing your way soon.  Drop us a line at Rob and Sue’s Worldtraveller