For a long time one of Great Britain’s best kept secrets, when the activities of Bletchley Park were final revealed to all after it was declassified under the Official Secrets Act, a race was underway to restore the rapidly decaying huts where hundreds of men and women (mostly women) served relentlessly to decipher enemy messages which were to shorten the war significantly.

Many years later, and after many years of tireless restoration, the Park now stands to inform and commemorate many unsung heroes of the second world war.

My own interest in Bletchley came about after watching the film Enigma, with Kate Winslet, and subsequently the TV series ‘The Bletchley Circle’ and most recently ‘The Imitation Game’, which gives a brief biopic of the short and somewhat sad life of Alan Turing. It’s been a place on my ‘bucket list’ for quite a while, so it was nice to finally get a chance to cross this one off the list.

Entering the park, you immediately get a sense of the understated, discrete nature of the place. Very little signage on approach and a barrier on the entrance makes you feel like you are entering a still operational secret facility.

The Park itself is quite large, and took us a good 2 1/2 hours to get round – and we could have easily spent the same again had we chose to watch every video, read every display and tried every interactive demo that was on show.

Following the recommended route, we started at the top of the park where the beautiful old Mansion sits, which has a family history of its own, with rooms set out exactly how they would have been back in the forties. The sound effects that fill each room are cleverly done, with good quality audio really making you feel like the original occupants are right there with you, busily at work. 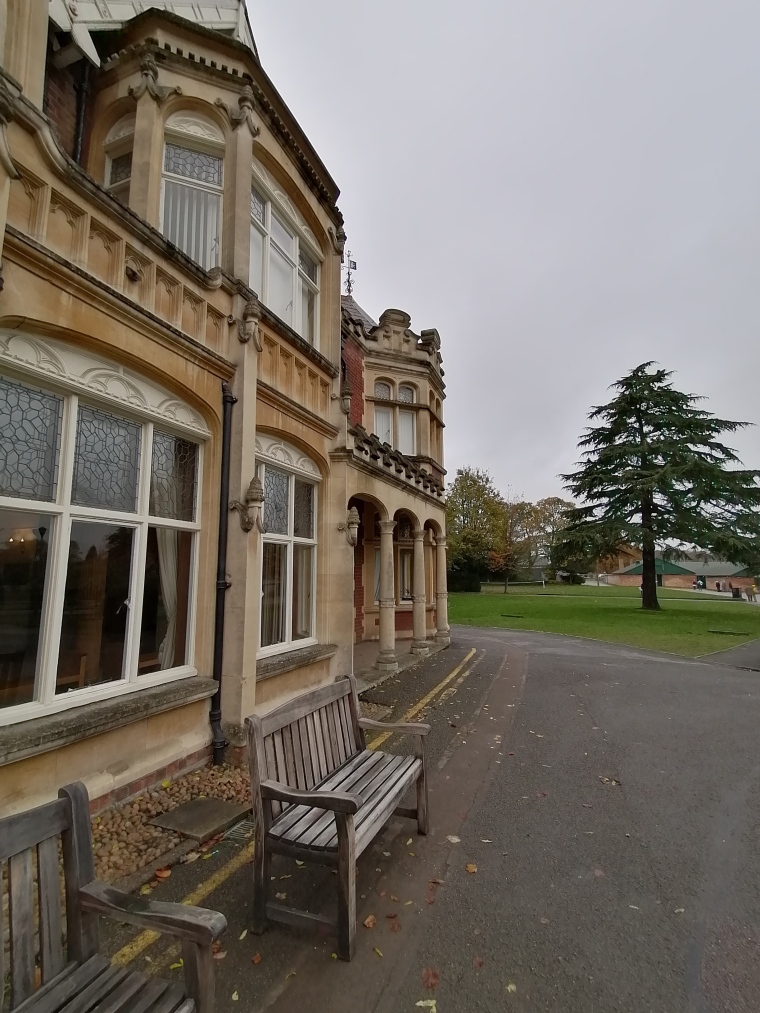 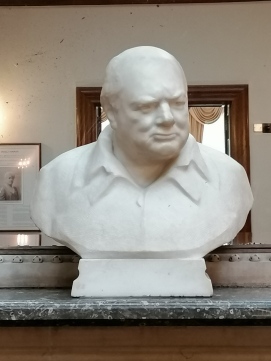 The library is quite something else, still stocked with books from the period in wall to wall glass doored wooden bookcases.

Round the back are the garages with some fine examples of vintage cars, trucks and motorcycles, including the open top Sunbeam Tourer used in the film “Enigma”, which was donated by Mick Jagger. 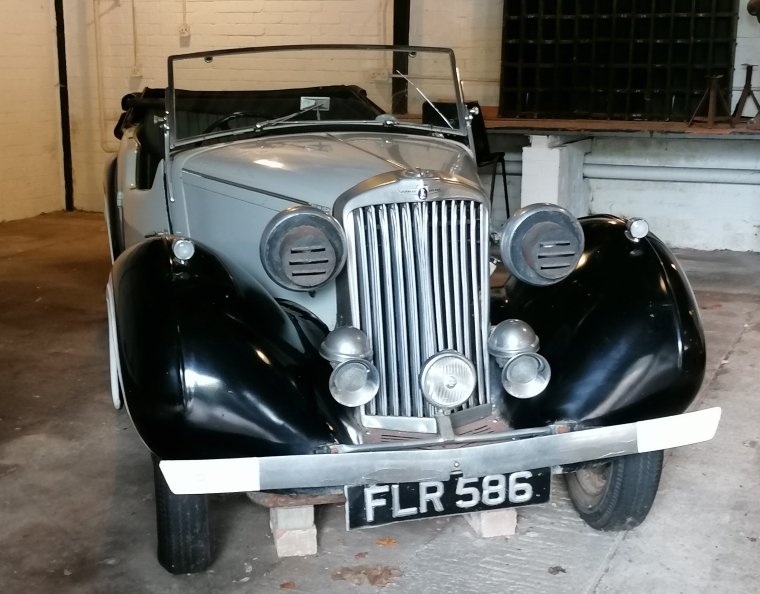 Continue past the old tennis courts (with eerie extremely realistic sounds of a match taking place from hidden speakers), you come to various exhibitions in the old huts, demonstrating the conditions that the staff worked in for many years.

Again, the sound effects are spooky, with sounds of footsteps on the wooden floors, and enhanced by video footage of characters from the period projected on the walls behind desks, or stood having conversations in offices, totally unaware of your presence eavesdropping on them. 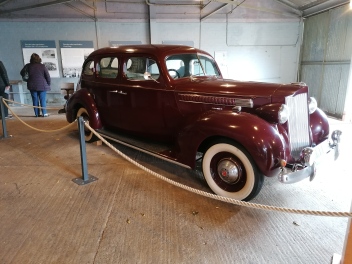 There was a temporary exhibition on in the teletype hall, which detailed the activity of Bletchley leading up to the D-Day landings and the year afterwards until Germany and Japan surrendered.

The D-Day display culminated in a video presentation, and the multi-projector / multi-screen movie footage, a mixture of new footage and vintage news reel, was reminiscent of my visit to the Buchenwald concentration camp. Although not quite as heart-rending, it was still poignant, and brought home not only the effectiveness of the work of the codebreakers by not just breaking the German codes but also feeding them false information, but the fact that the soldiers on the front line were totally unaware of their existence and could not appreciate the difference they were making to the war on the ground.

Of course, everyone now thinks they know the story of Alan Turing, brilliantly portrayed by Benedict Cumberbatch, but two things are obvious from the Bletchley experience. Firstly, there was much more to Alan Turing than the film displayed, and he actually went on to do other things before his untimely arrest and subsequent death. One piece of text on display is a copy of his only published paper “The chemical basis of morphogenesis” which explores why mathematical patterns exist in nature. That he was a genius could not be in doubt, with the two sides of the book on display comprising of multiple and (to the layman) seemingly meaningless equations, which probably say more than volumes of text ever could.

The second revelation is that Bletchley isn’t all about Turing. Although a part of it is devoted to his “Bombe” decryption machine invention that features in the Imitation Game movie (I didn’t see any reference to it being called ‘Christopher’), there is much more to see, and you come to realise that there were many more discoveries and famous events emanating from the park.

One example of this has to be the breaking of the Lorenz machine.

Everyone has heard of Enigma, a German code machine which had three rotating electro-mechanical cylinders used to produce the ‘unbreakable’ code. Enigma was used all over the war, with Italian, German, Spanish and even Japanese versions – and Bletchley apparently has the largest collection of Enigma machines around, in many different versions of the original machine. 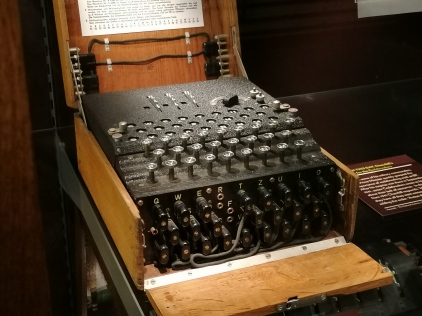 While Enigma was used routinely on the war fronts to send and receive messages, the important information passing between the upper levels of the German government used an even stronger encryption, using a TWELVE cylinder machine called Lorenz.

A significant part of the exhibition focuses on the work of Bill Tutte, who was responsible for breaking this more difficult cipher, AND producing the first properly digital electronic computing machine, the real forerunner to the present day computer.

Also on site is the National Radio Centre, a sort of side-stall of an exhibition which has some very good demonstration displays and a good range of historical artefacts all relating to the development of modern day radio communications. What was particular interest to me was a live demonstration of an Amateur Radio Station, where two very proficient guys gave a live demo of current shortwave radio equipment, listening in on live stations and interpreting (translating?) morse code right in front of us, as if it was just someone speaking English to them. Amateur Radio has certainly moved on since when I was interested in it back in the 80’s. I wonder if they class themselves as ‘Radio Hams’? One of them apparently ran the amateur radio club at Cambridge University!
Anyway, a big thanks to them for an interesting chat.

And of course you have to end with the obligatory gift shop and cafeteria. The gift shop had some interesting retro stuff on sale – who can remember playing ‘Beatle’? Brought back some memories I can tell you!

Bletchley Park may not appeal to everybody, but if you have an interest in the history of the second world war, this is a place that must be on your ‘to do’ list.