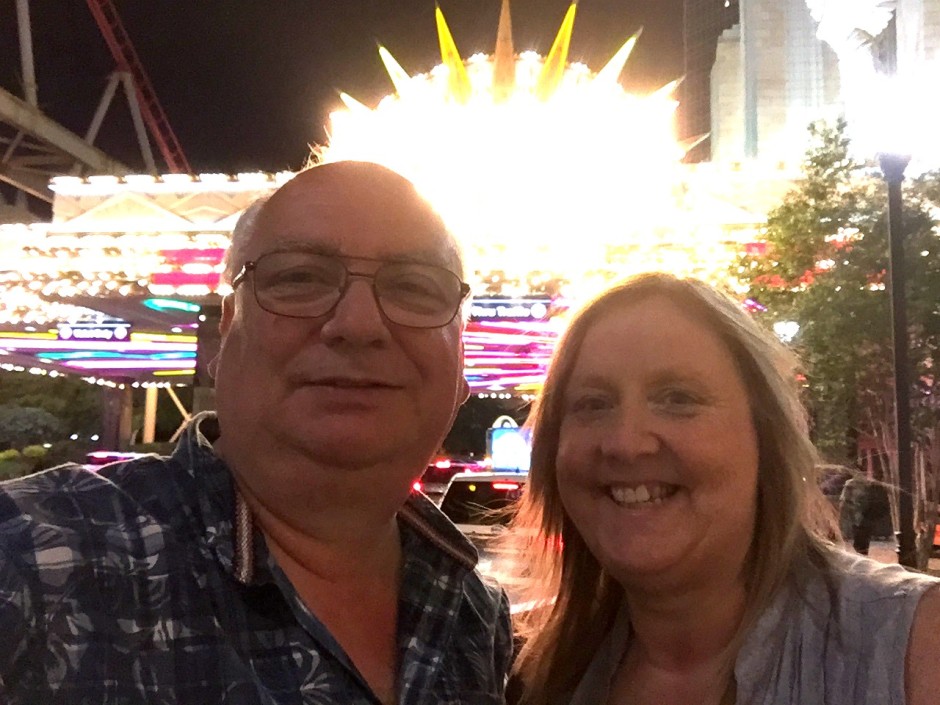 If you are looking for a good hotel in Las Vegas, then I’m afraid to say you are spoiled for choice.   And we are no experts, as we’ve only been the once, and we’ve only had one experience of a hotel over there.   But it was a good experience, so we will tell you more…

The New York New York hotel sits on the Las Vegas strip on the Tropicana Ave intersection, connected to the adjacent MGM Grand by a pedestrian bridge, and also to the Excalibur hotel by a bridge crossing Tropicana Ave.   On the other side of this intersection also stand the Luxor and Mandalay Bay hotels.

The NYNY hotel is thus towards the south end of the strip, very close and convenient to McCarran airport.

A quick word of caution re: taxi’s.  You will probably read that there are two routes to the south hotels, one shorter route via Paradise Rd / Tropicana Ave that should cost in the region of $12-15 one way, and a longer route which initial heads away from the city through a tunnel, and then picks up the expressway to return to the strip, with a hiked up cost of anything from $20-35.  This is called the notorious ‘tunnel’ route as it goes through a short tunnel as it leaves the airport, and you are advised to say to the driver “don’t use the tunnel” when giving him the address, before you set off.   We didn’t heed this advice, expecting the driver to be honest, but unfortunately we got stung with a $33 bill.

According to the Nevada Taxi Authority, taking you the long way (known as long hauling) is illegal and can result in loss of license and prosecution.  And they even have a website with instructions on how to report anyone who long hauls you.

Now if you think you’ve been overcharged, you can take a photo of the car, license plate, driver, driver’s cabby license on display on the dashboard, probably fingerprints too,  and then send in your report to the authorities.  But none of that will help.

If you don’t live in the States, let me tell you.  Reporting a driver is a BIG waste of time.  After numerous forms to complete, emails to write, I was told that my photos didn’t identify the driver and I would have to do a photo ID (via email) and I might even have to return to Las Vegas to testify against him.   COME ON!  Like that’s going to happen.   So don’t waste your time complaining, but DO DO DO state clearly “NO TUNNEL” when you get in the cab and then refuse to pay the guy if he then takes the long route and charges you over the odds – give him $15 and no tip and if he kicks off ask the concierge at the hotel (they will be eagerly dragging the bags off you as you climb out the taxi) to call the police or security or something.  The Taxi driver will soon get the hint and drive away.

Back to the hotel.  Talk about spectacular.  It’s just huge when you get inside.  It’s huge on the outside too, with a mock up of the Brooklyn Bridge, a replica of the Statute of Liberty, Empire State building and many other famous NY landmarks.  We sort of walked in, and then stood, looking around, just trying to take it all in.

Inside the hotel, the ground floor is a mixture of open bars, restaurants of all descriptions, shops, and of course dominating the centre, the casino. Plus the rollercoaster pops in and out of some of the restaurants which is quite thrilling. Having visited a few of the other hotels, I felt the casino in NYNY somehow had a little bit more class about it, wasn’t quite as in your face as some, and not as regimented or ‘mechanical’ as others.  What I mean is, some of the casinos just look like simply factories for gambling, sterile, with no atmosphere.   The NYNY seemed to have some of the glitz and grace that I imagined the older ‘traditional’ casinos of the 50’s/60’s would have had, as well as a central bar that got very lively at night when the music started! 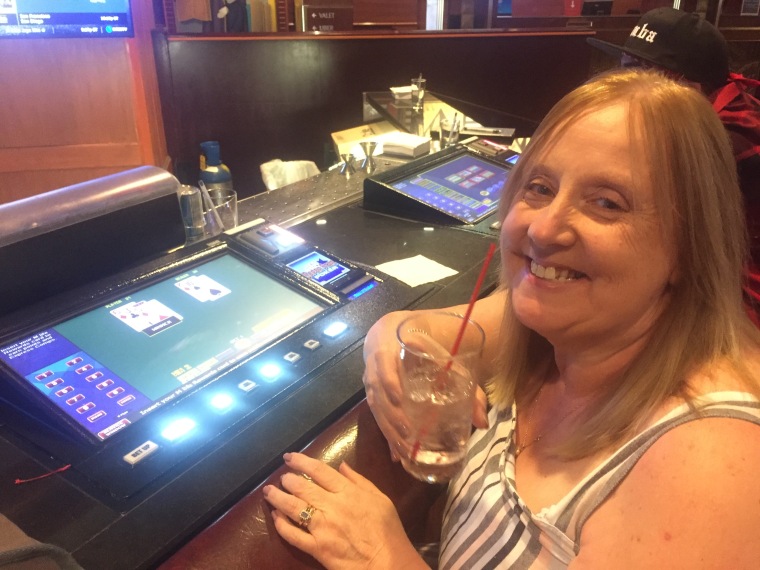 Sue tries her hand at video blackjack at the bar

It used to be a bit quiet in the afternoon, but it was writhing towards and after midnight, and we were fascinated how many people were just coming in, decked out in their best parties clothes after a long night out, as we were coming down for breakfast.

Clothes wise, anything goes – from the ultra casual (aka scruffy) to the full glitz tuxedo and ballgown, glitter heels and all.  It is certainly a sight to behold and we spent many a night just people watching.

We originally booked a park lane suite but through a good deal with booking.com managed to upgrade for about £8 / night extra to a Madison Suite on the 33rd floor, overlooking the T-mobile arena next door and also peering down on the roller coaster below.  This hotel is seriously high! 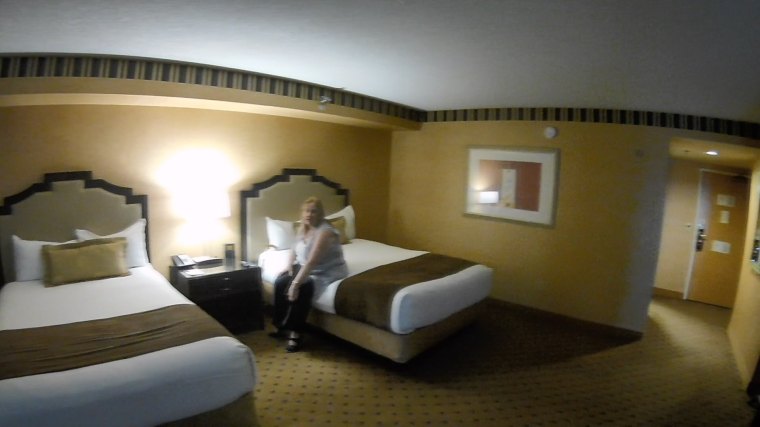 The difference between the two rooms is 100 square feet, and to be honest we were rattling in the room, it was so big.  We had two queen beds, good size doubles, and enough room between them and the small table and chairs to have a bit of a workout.  The bathroom was also huge, and although looking a bit well worn in places, it was nevertheless clean and well maintained,  and still quite classy.

As you might expect, the room came with the usual amenities, big TV with 200 odd channels, large wardrobe, but a nice touch was the welcome pack of fruit, cheese and wine, fresh flowers and a thank you / welcome greeting card and letter from management.

Despite our expectations, although a busy hotel, we didn’t get much noise from the other guests, but our room was adjacent to the main lift block and there was quite a bit of noise through the night from the winding motors.  I suggest you ask for a room some distance away from the lifts – although for us it was very convenient to walk off the lift and straight into our room.   I’ll leave you to make the choice.

Maid service was satisfactory,  as was the porter service.  We had a bit of an issue with the laundry service, who managed to lose my trousers on the first night, but I got them back two days overdue, with an apology, no charge for the cleaning and a $50 compensation voucher which paid towards a slap up meal on our last night.   Can’t fault them, when they get it wrong they make sure you have nothing to complain about!

We ate breakfast in the ‘America’ restaurant every morning (seated under a HUGE  map of the United States) except one morning when we went to the Denny’s just over the bridge on the other side of the strip.  Now, I used to be a Denny’s fan but I’ve got to say, we were somewhat underwhelmed by the service and quality of food, and although the ‘America’ hotel restaurant was a bit more pricey by comparison, it was very good service and excellent quality food.  And they forgot to order breakfast one morning so we got a discount, although we weren’t complaining, and one evening we had dinner in there, and after placing our order we sat and waited patiently, and after about 30 minutes the manager arrived and said it was taking too long so she gave us a 50% discount!   Honestly, it would be unheard of in the UK!

Would we go back?  Well, surprisingly Las Vegas wasn’t as bad as I had envisaged, and I’d like to go back to see the bits we had to miss this time round.  Would we stay at the NYNY again? Absolutely.  Of course we saw other hotels that we quite fancied – notably the Paris Hotel with its Paris streets theme was awesome – but then it was also extremely busy and there always seemed queues outside all the restaurants, which we never experienced back at the NYNY.  So maybe we should stay in our comfort zone…

If we had the funds we have been told the Bellagio or Venetian are fantastic hotels to stay in, but in some respects I would prefer to save the money.  The only thing that may sway our decision would be having a hotel further down the strip so we could explore the other end a little easier.

Overall – No problems whatsoever with the New York New York hotel and it gets a huge thumbs up from us.

Get a glimpse of the rooms in our video here.

One thought on “NYNY. So good we’d stay there twice…”